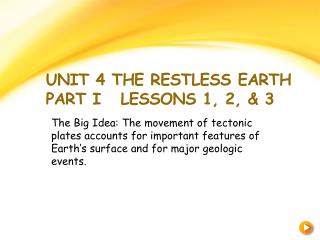 Inside the Earth - . saturday science. crust. this is the thin, rocky layer we think of as earth’s surface. its

Grade 8 Science - . unit i: water systems on earth chapter 3: this chapter is all about ocean currents and how they

Section 1 Inside the Earth - Chapter 7. section 1 inside the earth. the composition of the earth. 3 layers crust, mantle

Unit 1 Physical Geography: The Restless Earth - . unit lessons why is the earth’s crust so unstable? what happens at

Unit 1 Geography - . georgia performance standard (gps) ss8g1: the student will describe georgia with regard to

The Restless Earth - . inside earth. your task…. you will design a diagram of earth’s interior to scale you will

New Topic: The Restless Earth - . learning objectives: to recap the structure of the earth, convection currents, and the

Unit 4 The Restless Earth Part I Lessons 1, 2, &amp; 3 - . the big idea: the movement of tectonic plates accounts for

UNIT 4 REVISION - . plasticity. ivan pavlov and his dogs. the key elements of classical conditioning. the neutral