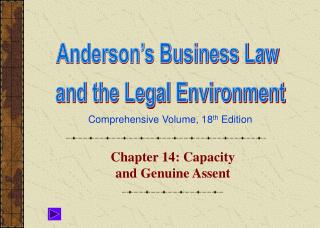 Chapter 14: Capacity and Genuine Assent. Contractual Incapacity. An agreement that otherwise appears to be a contract may not be binding because one of the parties lacks contractual capacity . Module 1: Essential Skills - . in this module, we will: explore the concept of being genuine discuss key communication

Chapter 8 Capacity, Legality, and Enforceability - . learning objectives. does a minor have the capacity to enter into an