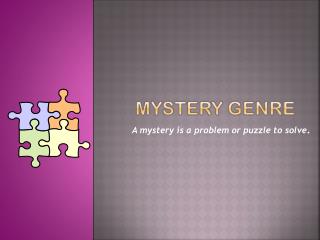 Mystery Genre. A mystery is a problem or puzzle to solve . . Elements of a Mystery. Characters, Setting, Mood, Mysterious Circumstance-Plot, Clues, Red Herring, Motive, Resolution to the Mystery . Characters. Mystery Genre - . what is mystery??????. realistic fiction everything in the story revolves around a puzzle or an unusual

Genre Criticism - . what is a genre? genre means type or category it is generally seen as a fusion of semantic

Genre vs. Theme - . what’s the difference? let’s first look at genre…. genre vs. theme. think of genre as a

Mystery Genre - . by sophie, katie and jessica. features of mystery texts. there is always a problem to solve.

How do mystery authors hook and hold readers? - . authors in the mystery genre tend to hold readers by keeping readers

Elements of Mystery - . reading the mystery!. a mystery has:. catchy title mood of suspense clues to keep the reader

Key Media Concept - Genre - . distributors/marketers like genre because:. they can market the film using stars connected

English Quiz - . by: daniel, alex, liam. question 1. if someone wrote a book about themselves and wrote it themselves,

Detective Fiction - . genre introduction. the genre. detective fiction is one of the most popular types of the mystery

What is the Genre? - . that is not genre!. genre to the g to the e to the n re. nba championship. i know genre is gen

A Multi-Genre Paper- Holocaust - . everything you’d want to know to make an a. writing genre… what is it?. you are

Mystery Unit Intro - . what is the mystery genre?. also known as crime fiction centered around trying to solve a strange

Jane Eyre - . callie molly morgan justine 4 th period. what is a gothic novel?. a genre of fiction characterized by

Mystery Genre - . what is mystery??????. realistic fiction everything in the story revolves around a puzzle or an unusual

Mystery Genres - . question #5. “and then there were none” agatha christie powerpoint by shannon kratzer. locked