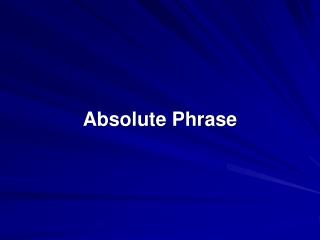 Style Strategies for Your Writing - . five simple strategies to improve sentence variety brought to you by the center for

Identifying PHRASES - . a quick preview. definition &amp; kinds. a phrase is a group of words that function as a unit

Grammar Warm-Ups with “This I Believe” statements - . adapted from laying the foundation, grade ten and the capital

Misplaced and Dangling Modifiers - . the difference between clarity and awkwardness. first things first…. what is a

9 Grammar Phrases - . prepositional phrases. phrase. a phrase is a group of words, without a subject and verb, that

9 Grammar Phrases - . absolute phrases. phrase. a phrase is a group of words, without a subject and verb, that functions

Identifying the Absolute Phrase - . on the next slide are four sentences written by professional writers. 1. she

The Phrase - . kinds of phrases and their functions (chapter 16). what is a phrase?. single group of related words used

Sentence Parts and Phrases - . sentence. a group of words that has a subject and a verb and expresses a complete thought.

ABSOLUTE PHRASES - . the following sentences were written by professional writers, but some parts have been deleted. she

Learning How to Combine Sentences - . doc holley. why do i need to combine

Ablative Absolute - . with the grammar having been learned, the students were happy. what is an ablative absolute?. the

Absolute Phrase - . &quot;six boys came over the hill half an hour early that afternoon, running hard, their heads

Grammar Review - . clause vs. phrase. clause: a group of related words with both a subject and a verb. may or may not be

Phrases &amp; Clauses - . henderson. phrases. a phrase is a group of words that behaves as one particular part of