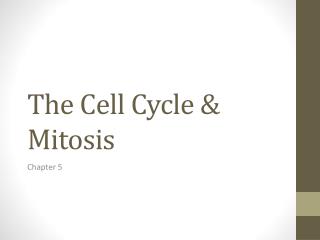 The Cell Cycle & Mitosis. Chapter 5. 5.1 – The Cell Cycle. Key Concept: Cells have distinct phases of growth, reproduction, and normal functions. When a living thing grows, what happens to its cells?. Chapters 12 and 13 - . objectives describe binary fission in bacteria describe the structures that play roles in the