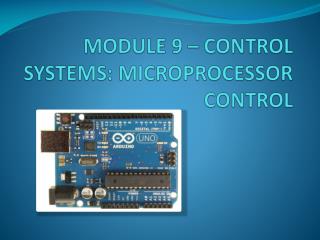 MODULE 9 – CONTROL SYSTEMS: MICROPROCESSOR CONTROL. Goal. This module is to provide an introduction to microprocessor control systems and how they can be used for ROV control. The MATE ROV Control System is used as a reference. Objectives.

Control &amp; Logo - . what uses control?. we can control electrical devices by programming instructions into them.

Robust control - . saba rezvanian. fall-winter 88. robust control. a control system is robust if it is insensitive to

An Early Warning System Based on Reputation for Energy Control Systems - . a review by raghu rangan wpi cs525 september

Control Systems - . lect.6 stability basil hamed. chapter 6. after completing this chapter the student will be able to :