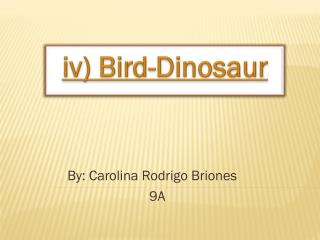 By: Carolina Rodrigo Briones 9A. iv) Bird-Dinosaur. Dinosaur : " terrible lizard “. They are another group classified in the reptiles, but aren’t lizards. (not necessary) Bird-Dinosaur : ___________

4.1 Plate tectonic processes - . 4.2 radiometric dating. 4.3 changes in the mean number of ribs in eight lineages of

Birds - . “reptiles by another name”. general characteristics of birds. adaptations for flight a ppendages modified

Birds - . ornithology is the study of birds. in a clade with dinosaurs!!. taxonomy kingdom animalia phylum chordata

Birds - . chapter 4 – birds and mammals lesson 1. characteristics of birds. a bird is an endothermic vertebrate that

Birds - . biology 112. what are birds?. reptile-like creatures that have a constant internal temperature two legs covered

BIRDS - . rebeca del río bermejo. classification. what are they ?. birds are vertebrate animals. they characterized for

Birds of Paradise - . gabriel bulan may 13, 2014. what sound does it make?. it makes harsh noises and mimic sounds and

Bird Biology and Ecology - Northern flicker. bird biology and ecology. i. ornithology is the science of the study of

Dinosaurs: Inference and evidence - . what do we really know?. how does a fossil form?. 1- death 2- rapid burial (usually

Emu on the run - An emu, a flightless bird, flees from southern california