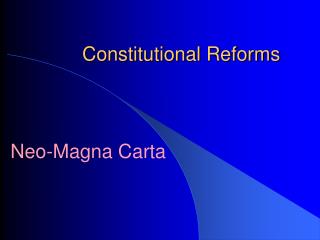 Constitutional Reforms. Neo-Magna Carta. The State. Today the State is one of the vital sovereign institutions amongst several social institutions which organizes a group of people in a certain area of land, governs them, and promotes their welfare and oversees their good. Constitution. Women's Rights 1890-1920 - . objectives. analyze the impact of changes in women’s education on women’s roles in

24.3 Women and the Progressive Movement - . the temperance movement. many texans worried about the effects of alcohol

Meeting Challenges in Policy Making and Public Engagement - . c.k. law 11/11/2010. challenges. due to changes in our