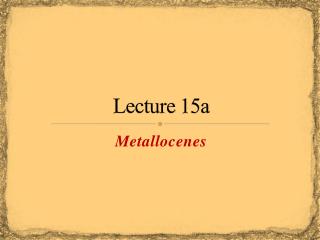 Lecture 15a. Metallocenes. Synthesis I. Alkali metal cyclopentadienides Alkali metals dissolve in liquid ammonia with a dark blue color at low concentrations (and bronze color at high concentrations) due to solvated electrons that are trapped in a solvent cage ( video )

Fabrication of an electrospun nanofibrous scaffold for use in the field of tissue engineering - . by: shannon daily

SHOCK - . what is shock?. shock is a life-threatening medical condition as a result of insufficient blood flow throughout