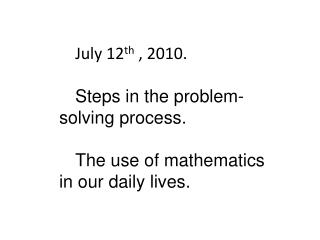 Welcome To Our Assembly This Morning July 11, 2010 - &quot;god is spirit, and those who worship him must worship in

July 21, 2010 DRAFT FOR DISCUSSION PURPOSES ONLY - Commonwealth of massachusetts it consolidation program it finance and

PROBLEM SOLVING &amp; DECISION MAKING - . learning objectives. at the end of the training, participants are expected