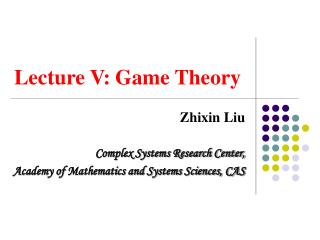 Game Theory - . “ in war the will is directed at an animate object that reacts .” - karl von clausewitz, on war mike

Game Theory Lecture Jan 18 - . in bertrand’s model of oligopoly. each firm chooses its quantity as the best response to

Figure it Out! An Introduction to Game Theory - . professor yan chen school of information university of michigan.

Game Theory II - . definition of nash equilibrium. a game has n players. each player i has a strategy set s i this is his