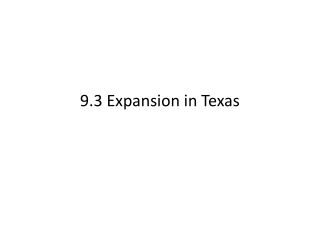 Expansion in Texas - . chapter 9 section 3. i americans settle in the southwest a. hispanic and native american

Expansion in Texas - . chapter 9 section 3. americans settle in the southwest. the impact of mexican independence mexico

Expansion in Texas - . the fight for texas and the aftermath. spain and the mission system. although texas was spanish

9.3 - . ellipse. def: an ellipse is the collection of all points in the plane the sum of whose distances form two fixed

9.3 - . the arab empire. a.caliphs. the caliphs, or successors, spread islam this was mostly accomplished through the use

§ 9.3 - . operations with radicals. combining radicals. apples to apples, oranges to oranges,… you can only add

9.3 Reproduction in angiospermophytes - . assessment statements. 9.3.1 draw and label a diagram showing the structure of

9.3 Hyperbolas - . hyperbola: set of all points such that the difference of the distances from any point to the foci

Section 9.3 - . a time of conflict. i. defeating the barbary states. 1. pirates began attacking american ships in the

Section 9.3 - . tree traversal. universal address system. in ordered rooted trees, vertices may be labeled according to