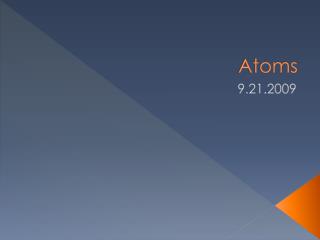 Atoms. 9.21.2009. What is an Atom?. Just exactly what is an atom and why is it important? An atom is the smallest particle into which an element can be divided and still keep its unique chemical properties Atoms make up elements Atoms are called the building blocks of matter.

HSPE Science Review - . questions 1-60. why do atoms bond to one another? a. to gain an octet of electrons b. to become

Chemical Bonds The Formation of Compounds From Atoms Chapter 11 - . hein and arena . 11.2 lewis structures of atoms.