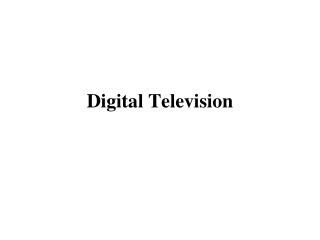 Digital Television. Learning Objectives:. By the end of this topic you should be able to: discuss the range of services offered by digital television networks; discuss the impact of these services on individuals , television companies and broadcasters ;

Digital Transactors vs Digital Integrators: A Quiz - While all the generations use social media, new technologies and

1980’s Television - . premieres in 1980. magnum p.i. barbara mandrell and the mandrell sisters nightline too close for

@enohe13 #enohe13 - . social networking. “we don’t have a choice on whether we do social media, the question is how

The Digital Television Revolution - . understanding the change. created and presented by tracy crouthamel. the basics of