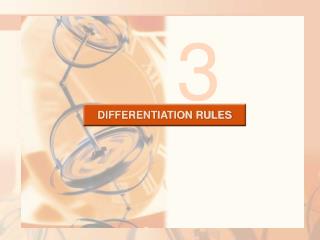 Derivative Rules PowerPoint Presentation - . you may work with a partner your end product is a presentation – using

3.3 –Differentiation Rules - . review: use the limit definition to find the derivative of the given function. 3.3

DIFFERENTIATION RULES - . the functions that we have met so far can be described by expressing one variable explicitly

3.3 Rules for Differentiation - . aka “shortcuts”. review from 3.2. 4 places derivatives do not exist: corner cusp