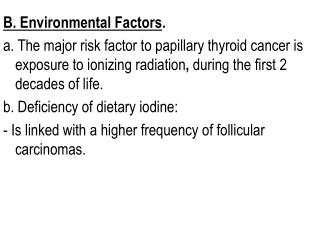 B. Environmental Factors . a. The major risk factor to papillary thyroid cancer is exposure to ionizing radiation , during the first 2 decades of life. b. Deficiency of dietary iodine: - Is linked with a higher frequency of follicular carcinomas. . 1. Papillary Carcinoma :