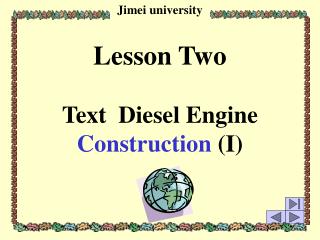 Lesson Two Text Diesel Engine Construction (I). Bedplate( 机座 ) and Frame( 机架 ) The bedplate, which in most cases is of the welded design , is bolted to the seating which forms part of the double bottom of the ship. Cylinder cover. Tie rod. Cylinder block. A-Frame (Entablature).

The Diesel Cycle - . by: ben brady. how it works. the creator. created by rudolph diesel had a dream for a more efficient

CHAPTER 4 Diesel Engine Operation and Diagnosis - . objectives. after studying chapter 4, the reader will be able to:

Lesson one Text How does a Marine Diesel engine Work? - . *the diesel engine is a type of internal combustion engine

WHY SHOULD WE CHOOSE A DIESEL ENGINE? - The fuel prices have been skyrocketing during recent years. that is why; the

Diesel Engine - . the only difference between diesel engine and a four-stroke gasoline engine is: no sparkplug on diesel