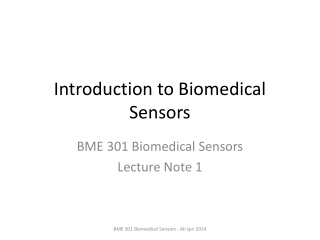 Biomedical Instrumentation I - . chapter 8 in introduction to biomedical equipment technology: electrocardiography by

Sensors - . material taken from robotics with the boe-bot. where are we going?. sumo-bot competitions. devices that

Introduction to Sensors - . or, how the world gets into our programs. mechatronic systems. microcontroller. decision