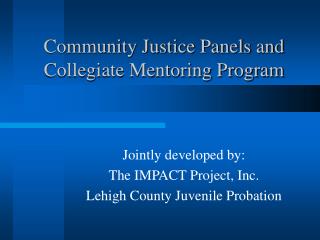 Mentoring Program - . august 25 th , 2014. why is this needed?. staffing: retention of existing officials recruitment of

Mentoring Program - . march 3 rd , 2014. why is this needed?. staffing: retention of existing officials recruitment of

Community Justice - Idaho charactercouncil, inc. creating a culture of character, one person at a time.

LSOP Mentoring Program - . at the end of each quarterly meeting, an lsop participant will be chosen to serve as the

APFOA MENTORING PROGRAM - . keeping apfoa strong!. at the end of this session, you will be able to:. define mentoring.