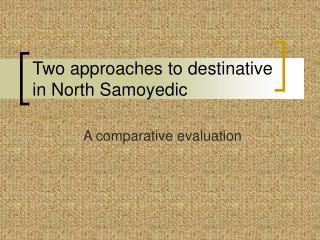 Two approaches to destinative in North Samoyedic. A comparative evaluation. Data background. The presentation would be impossible without Valentin Goussev and Maria Brykina, who provided access to the Electronic Corpus of Nganasan, helped with the morphological analysis and corrected mistakes. Two Colorado Approaches - . how post aca/obamacare health reform is advancing along two paths and how the single-payer

Two Similar Approaches - Name: date: period :. topic : multiplying polynomials essential questions : how can you use the