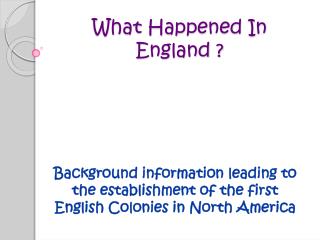 What Happened In England ?. Background information leading to the establishment of the first English Colonies in North America. English Government. English Government in 1606 can be described in a hierarchy or levels of different classes. King Nobility Gentry Ordinary People or Commoners . The power of creative collaboration - Here at table19, we believe that great work is only possible when clients and their

Boston Massacre Painting - There are many different versions of what happened at the boston massacre. paul revere used

Black Sea Flood 5600 BC (What happened ?) - . findings and interpretation of geologist dr. william ryan as presented by

Alternative Marketing: What Happened When Etailers Dove Into Blogs, Podcasting, and RSS - . first, a 15-minute primer on

WHAT JUST HAPPENED AND WHERE DO WE GO FROM HERE? - . dennis k. winters chief, office of economic advisors wisconsin