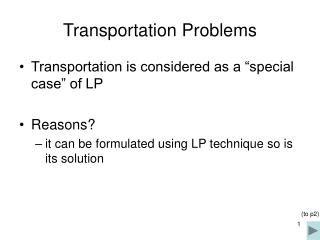 Example (Transportation Problem) - . a company has two plants producing a certain product that is to be shipped to three

Transportation models and its variants - . chapter 5 dr. ayham jaaron. what is transportation

Chapter 6: Transportation, Assignment, and Transshipment Problems - . a network model is one which can be represented by

TRANSPORTATION Traffic Problems in Big Cities - . wherever you go, go with all your heart confucius. proverbs tell me