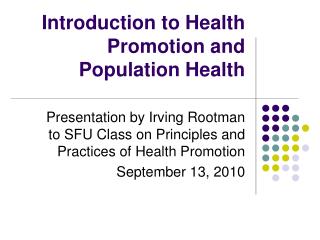 Introduction to Health Promotion Planning - 2. ancient chinese proverb. if we do not change our direction, we are likely

HEALTH EDUCATION AND HEALTH PROMOTION - . objectives: you students will be capable. to differentiate between health

HEALTH PROMOTION - . an interdisciplinary perspective change is one thing, progress is another; change is scientific,