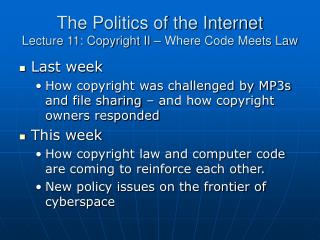 The Politics of the Internet Lecture 11: Copyright II – Where Code Meets Law

The Politics of the Internet Lecture 11: Copyright II – Where Code Meets Law

Should Christians be involved in Politics? - . “politics” in our studies does not mean:. posturing for position and

Politics - . chapter 9. what is politics?. politics the way we organize ourselves so that the members of our society can

Y490 Politics of the Internet - . february 15, 2012. e-mobilization. uses of the internet by interest groups and social

Politics and Media - . m6920 october 9, 2001. goals. explore the relationship between policy and politics describe the

Y490 Politics of the Internet - . february 1, 2012. digital divide. gap in computer and internet use across various

Politics Degrees - . with some bias towards exeter university. politics with what?. single honours 33 economic and

Definition of Politics (Webster’s Dictionary) - . politics is “ the art or science concerned with guiding or

How influential is the media in politics? - . www.educationforum.co.uk. media and politics. possible question identify

Introduction to Comparative Politics - . issues to be discussed. why do we study politics (what is politics and why is it