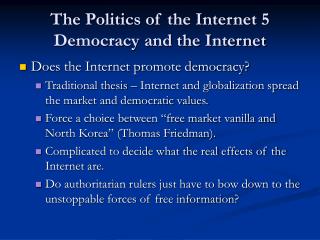 The Politics of the Internet 5 Democracy and the Internet Does the Internet promote democracy? Traditional thesis – Internet and globalization spread the market and democratic values. Force a choice between “free market vanilla and North Korea” (Thomas Friedman).

Welcome to Internet &amp; E-Mail - . instructor: heman lee www.aeromaniacs.com/class hemanlee@live.com. what is the