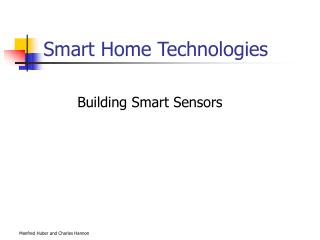 SMART technologies - . using interactive whiteboards for formative assessments by oralia reyes. what is an interactive

Home Smart Home - A home that is equipped with special structured wiring to enable occupants to ... have home to call you

Smart Home - Overview . what is smart home" device? what our device will dosimilar devices on the market device

Smart Home - . and an introduction to agent system. in the near future home appliances are not stand-alone things