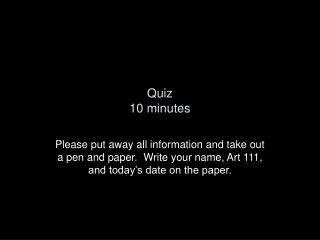 Quiz 10 minutes. Please put away all information and take out a pen and paper. Write your name, Art 111, and today’s date on the paper.

PREPARE FOR YOUR QUIZ SHARPEN PENCILS GET NOTEBOOK PAPER OUT 

English language quiz - . created by: yildan husnu. 1. what is the most commonly used letter in the english alphabet?

Kinematics Quiz A bicycle travels with a 4.5m/s velocity for 10 minutes. How far does it travel? - Rearrange the

To Do in the first 10-20 minutes: - . peer planner evaluation review for quiz response 10 do you think this class has

Quiz 1 - . please clear your desk of everything except for a pen or pencil and a piece of paper. no talking or use of

Lets Take a Quiz - . put your smarts to the test!!!. who do you need to resemble?. jason. kelly. or. he stayed up all

Amendment quiz 11-20 - . you have 10 minutes to take one last look at your cards. take out a sheet of paper and number it

Quiz – 5 minutes: Separate Paper - . in which of the following would you most likely find commercially usable