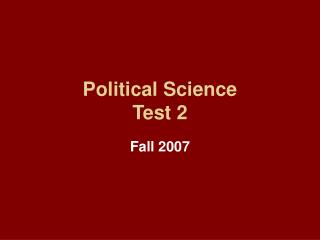 Political Science Test 2. Fall 2007. Chapter 5. Question 01. What is the primary impact upon democratic institutions and elected officials of the political culture’s fixation with polls and polling?

2007 AP Psychology exam - . 1. the answer is a. b. tempting answer but the iq is not necessarily valid c. huh? validity