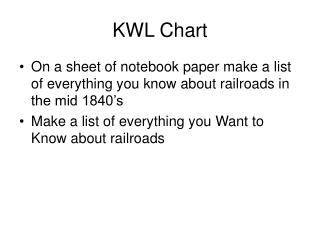 Aimsweb overview - . k–w–l chart. welcome! let’s begin with a few questions… what do i know about aims web? what

KWL - . an instructional reading method. the kwl system. k-w-l is a three column chart that serves as a graphic organizer

Light and Sound - . kwl. where do sounds come from?. create a ‘kwl chart’. tempo. what types of sounds are there?.

IB PYP - . and project based learning. kwl chart. at your tables, complete the kwl chart what do you know about project

Activating Prior Knowledge - . based on a presentation by: lucy castañón. did you know?. “each student brings to the

Inquiring Minds Want to Know! - . how to motivate students for learning. tapping into prior knowledge. find out what the

KWL Chart on WAVES - . what are waves?. a wave is a disturbance that transfers energy from place to place. energy is the

Strategy Report for Reading: Using KWL’s for Comprehension - . by: christine bryan. where the strategy was found. kwl

At the Bell Create a KWL chart on Antebellum South - . k-things i already know about the south w- things i want to know