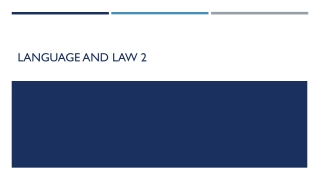 LANGUAGE AND LAW 2. Don’t do it !. Threats and warnings have a great deal in common They show different aspects of the law While it is illegal ( in some cases ) to make threats , warnings are required for a number of consumer products. Read this !.