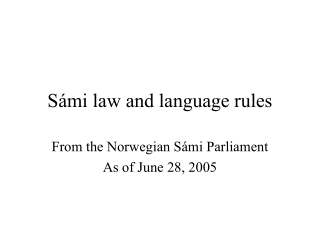 Sámi law and language rules. From the Norwegian Sámi Parliament As of June 28, 2005. Where do the laws apply?. In the administrative area for the Sámi language 6 municipalities (5 in Finnmark and 1 in Troms) The administration of Finnmark and Troms Public agencies. Language - . the world of words. the nature of language. language is symbolic. symbols are arbitrary symbols are

Animal Human Language - 2. what is linguistics?. it is the scientific study of human language.scientific

Datalog - . s. costantini. logic as a query language. if-then logical rules have been used in many systems. recursive

The Nature of Language - . by donna margaret. what is language?. languages are systematic rules and principles, like a

Structuralism: Relations between rules and uses of language - . langue: the system, rules, or order of a language, or

Language - Nicholas j dugan interpersonal communication . language . overview. what is language? what are some of the

Language - . turning thoughts into words. what is language?. language consists of symbols that convey meaning, plus

Thinking and Language - . language. language: the expression of ideas through symbols (spoken/written/etc.) that are

Child language acquisition - . to what extent do children acquire language by actively working out its rules?. what are

Chapter Nine - . the linguistic approach: language and cognitive science. linguistics. the study of language. a variety