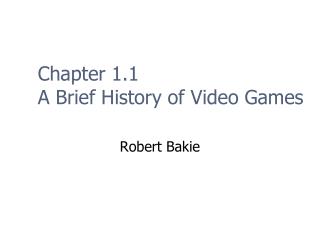 Chapter 1.1 A Brief History of Video Games Robert Bakie The First Video Games William Higginbotham and Tennis for Two Created in 1958 for the Brookhaven National Laboratory’s annual visitor day Display was an oscilloscope Sound effects were a side-effect of the relays that made the game run Top 5 Video Games for Couples - Love is in the air and it's time to countdown video game couples greatest hookups!

Development of Video games - The video games have been developed more from the past to present. now, the games are so

What Video Games Teach us about Learning - . debbie greh aenj 2011. this is an exploration of the power of video games to

One of the first video games. - The difference between old and new video games and consoles and how they effect us p ower

Video Games and Education - . what homework’s biggest enemy has to teach us about teaching. george and dylan woodbury.

What Makes a Video Game Good? - . a place where graphics and mechanics in gaming is nothing more but just a portion of