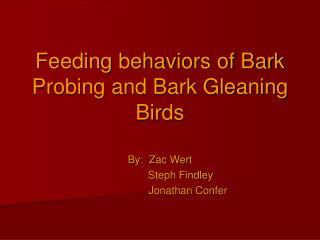 Feeding behaviors of Bark Probing and Bark Gleaning Birds By: Zac Wert Steph Findley Jonathan Confer Introduction Bark-probing birds and bark-gleaning birds compete against each other for the same prey. All woodpeckers are insectivores

NASOGASTRIC FEEDING OR GAVAGE FEEDING - . definition. gavage feeding is an artificial method of giving fluids and

Chapter 9 - Pay for performance: the evidence. chapter 9. chapter topics. what behaviors do employers care about? what

Feeding and Management of the Cow-Calf Herd - . unit 15. kinds of feed. cow-calf feeding programs are based on the use of

Leucocytozoon - . presentation by: sara meyers nicole haight. leucocytozoon. it is the most important blood protozoa of