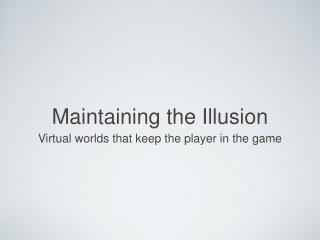 Maintaining the Illusion. Virtual worlds that keep the player in the game. Player perception is Key. The game cannot be infinitely large, completely non-linear, or as smart as the player. Instead of achieving these, control what you can: the player’s perception of the game world.

Owner Maintenance: Things You Need to Know About Maintaining Your Airplane as an Owner-Operator - . faa safety seminar

Digital Halftoning - . summary of 30.1.06 lecture. how to produce illusion of the original tonal quality of a image by

Allusions 3 - . an allusion, not to be confused with illusion , is a reference to another literary work, work of art,

Maintaining competence - . dr leena al- qasem. all countries need to ensure that the practice of medicine is ethical and

A+ Guide to Managing &amp; Maintaining Your PC, 8th Edition - . chapter 4 all about motherboards. objectives. learn

A+ Guide to Managing and Maintaining Your PC, 7e - . chapter 13 maintaining windows. objectives. learn how to set up and