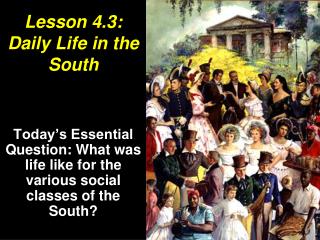 Lesson 4.3: Daily Life in the South Lesson 4.3: Daily Life in the South . Today’s Essential Question: What was life like for the various social classes of the South?. Vocabulary. stratified – layered resistance – the act of opposing or standing up to

Lesson 4.3: Daily Life in the South

Splash Screen - . are you ready for chapter 10? lesson 1: hundreds lesson 2: hundreds, tens, and ones lesson 3:

Daily Life - . a child prepares for a run at the madison ave. soapbox derby in decatur, ga. on sept. the annual event has