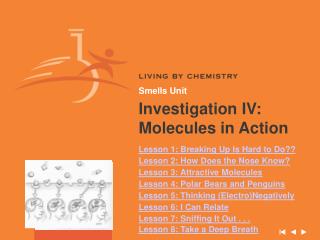 Smells Unit. Investigation IV: Molecules in Action. Lesson 1: Breaking Up Is Hard to Do??. Lesson 2: How Does the Nose Know?. Lesson 3: Attractive Molecules. Lesson 4: Polar Bears and Penguins. Lesson 5: Thinking (Electro)Negatively. Lesson 6: I Can Relate.

Higher Writing Unit: The Short Story - . writing the senses. step one – it’s all in the detail. describing: colour

Module 7 Feelings and impressions - . unit 3 language in use. language practice. that smells delicious !

IEM Potpourri (combine a bunch of unrelated stuff and see if it smells good at the end) - . daryl herzmann department of

Saving the Planet With a Bar of Soap and a Truck That Smells Like French Fries - . the oil recycling and biodiesel

Refactoring III - General philosophy. a refactoring is just a way of rearranging coderefactorings are used to solve