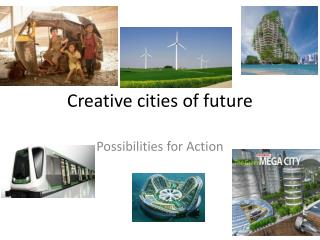 Creative cities of future. Possibilities for Action. Our Cities, Our Homes . Cities are a hub of activity, transition and living. For the first time in history, the majority people of the world are living in the cities; Delivering Creative Future - . 19th july 2006. our aim. this is about making the bbc the most creative organisation in

The Future of Twin Cities Transportation Policy - . november 28, 2007. a number of factors are converging to exacerbate

Cities in Competition : The Future - . summary and evaluation of the competitiveness study commissioned for citibank by

CITIES OF THE FUTURE sustainability, vitality and wellbeing - . in the zone conference 2009 perth, western australia 10

UPTOWN Urban Living and Smart Cities of the Future - Initiative for an artemis center of innovation excellence prof. dr.

Cities Expand and Change - . chapter 5 section 2. america urbanized. in the late 1800s america went through a period of