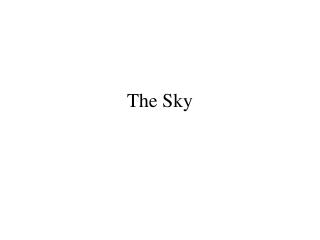 Looking skyward - Photographers often look up to capture an amazing aspect of our world. the sky can be a compelling Why do the ocean and the sky look blue? - Cloudy water vs. clear

Open Up the Sky - . jonathan stockstill. our beloved father, please come down and meet us we are waiting on your touch.

NuT , the sky goddess - . by darby s kiles 5 th grade. facts about nut. nut is the egyptian sky goddess. she is married

SOAR: The Sky in Motion - . celestial coordinates and the day. life on the tilted teacup ride. aileen a. o’donoghue

THE SKY - . chapter 2 (part 4) sun cycle and seasons. objectives. to be able to interpret and apply the term

Cycles of the Sky - . sun, moon &amp; seasons. earth in motion. the earth is not just “sitting” out in space,

Uranus in the Sky - . uranus. as seen by voyager. uranus highlights. accidently discovered in march 1781 by william