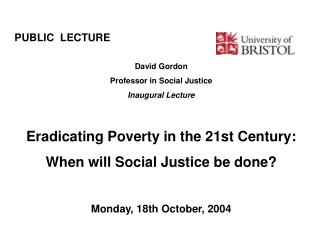 JFK’s Inaugural Address - . “let every nation know, whether it wishes us well or ill, that we shall pay any price,

What Sustains You? Resisting Burnout in the Face of HIV Activism and Social Justice Work - . shinen wong hepatitis

Albania Poverty - . by dean and peter!. how does poverty effect the people in albania. despite the economy robust in

Social Justice and the Environment - . “today, the dramatic effect of ecological breakdown is teaching us the extent to

from murder to social justice: a tale of technology and record keeping across two centuries - . leigh b. bienen ,