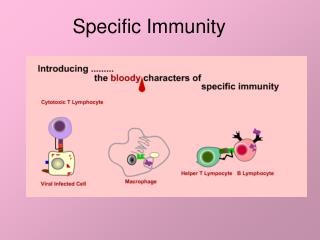 Specific Immunity. Who are the players?. Antigens: foreign proteins, usually part of virus or bacteria

Chapter 10 Dynamics of Adaptive Immunity - . this chapter tries to integrate much of what we have already covered so we

How Specific Immunity Arises - . while microorganisms are under assault by phagocytic cells, the inflammatory response,

Specific Immunity—3 rd line of defense - . who are the players? antigens antibodies and b-cells antibody editing and

Specific Host Defenses: The Immune Response - . the immune response immunity : “free from burden”. ability of an

ADAPTIVE IMMUNITY - . *to adapt means to become suitable, and adaptive immunity can become “suitable” for and respond