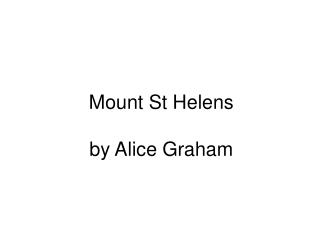 Mount St Helens by Alice Graham. Location of the volcano and background history. A volcanic peak, 2,549 m (8,363 ft) high The mountain is 6 miles (9.5 km) across at its base Location: South West Washington, USA The mountain is part of the Cascade volcanoes and the Cascade Range

Mount St Helens - . the first eruption. in 1975, scientists warned that mt st helens may well erupt again before the end

Mount St. Helens - . erupted in 1980 all life destroyed what happens after that?. remember! community ecology. we know

Mount St. Helens - . erupted in 1980 all life destroyed what happens after that?. ecological succession. a series of

cracker st-helens | backpage st-helens - Are you unhappy with the sudden closure of backpage.com and searching for sites

Mt. St. Helens - . 1980 eruption before, during and after. where is mt. st. helens. the cascade range is a volcanic chain