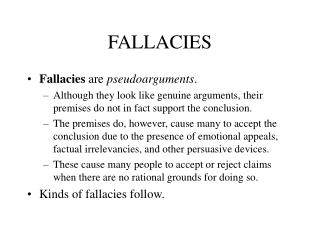 FALLACIES . Fallacies are pseudoarguments . Although they look like genuine arguments, their premises do not in fact support the conclusion.

Fallacies - . a defective inference is said to be ‘fallacious.’ a fallacy is a common pattern of defective reasoning.

Fallacies: - . strategies used to intentionally mislead, misinform, or deceive. definition compare 2 things that are not

Fallacies - . ignorance is not bliss… . what is a fallacy?. an error in the reasoning process jumping to a conclusion

Fallacies - . mistakes in reasoning or thinking. occurs when a speaker makes a claim that presents a range of choices.

FALLACIES - . common errors in reasoning that undermine the logic of your argument. common fallacies:. ad populum –

Fallacies - . learning targets: i can identify logical fallacies when they are committed. i can recognize why reasoning

Fallacies - . it’s not useful to think of ‘ fallacies’ as a laundry list of forms to avoid, or as an algorithm for

Fallacies… - . …and how to avoid them!. arguments. most academic writing tasks require you to make an argument—that

Fallacies - . what is wrong with the following sentences?. i love disneyland because i’m always happy there. everyone

Fallacies - . chapters 8 &amp; 9. deductive reasoning . from general to specific; have a law, premise, or principle

Fallacies - . ad hominem. definition: arising or appealing to emotions &amp; not to reason or

Fallacies - . steve wood tccc. definition. a fallacy is an error in thinking, logic, or argumentation. to create an