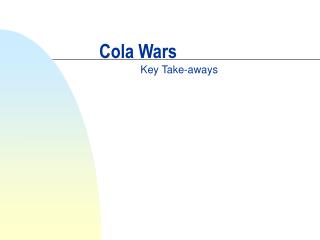 Cola Wars Key Take-aways Explaining differences in firm-level profitability Historically, the CP industry has been very profitable, while the bottling industry has been less so Exhibit 5: pretax margin 35% vs. 9% Exhibit 4: average ROE 20-25% vs 5-10%

Chapter 11: Between the Wars Fascism, Communism, Dictators &amp; the Road to WWII - . images capturing an era.

Glasgow University Astrosoc presents - . 30 th oct 2001. the physics of star wars. a long time ago, in a galaxy far, far

Cola Wars Continue: Coke and Pepsi in the Twenty-First Century - . the major themes of the case are:. understanding the

Coca-Cola - . chelsey petrey. “there is no limit to what a man can do or where he can go if he doesn’t mind who gets

CASE STUDY OF The Coke and Pepsi - . presented by: gulab sharma abhisek,vishal,ankesh,ankit,nimish,tekwani,sanjay,rahul.