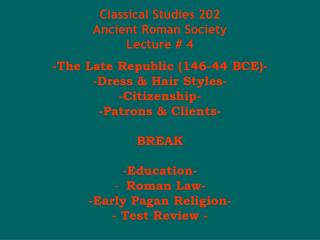 YEAR 12 CLASSICAL STUDIES mythology - . schoolhistory.co.nz. what is a myth?. muthos means ‘utterance’ or something

Chapter 11: Mediterranean Society; the Roman phase - . all roads lead to rome . . . . foundation of the roman empire:.

Roman Society and Culture - . 7.4. the emperor kept the poverty-stricken masses pacified by. giving them free grain and

The Late Republic - . pgs. 338-343. growth of territory. roman had to give the gauls a huge amount of gold to leave the

the Cult of Dionysus - . matthew kalberg. the cult of dionysus. the cult worshipped dionysus, as they danced in worship.

The Roman Forum - . sam harvey &amp; stephanie keyorian. what is the roman forum?. it was the center of political and

Roman Names - . how roman names worked. the roman word for “name” was “ nomen ”---like you see on your class

Single p 0 Electroproduction in the Resonance Region with CLAS - . kyungseon joo university of connecticut for the clas