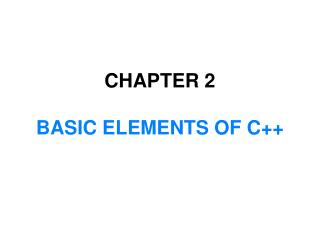 CHAPTER 2 BASIC ELEMENTS OF C++. In this chapter, you will: Become familiar with the basic components of a C++ program, including functions, special symbols, and identifiers Explore simple data types and examine the string data type Discover how to use arithmetic operators

Chapter 3 Molecules, Compounds, and Chemical Equations - . elements and compounds. elements combine together to make an

Chapter 11: Basic I/O Interface - . introduction. this chapter outlines some of the basic methods of communications, both

Chapter 5 - . examination and assessment of the neonate. gestational age and size. ga assessment should be done within 12

Data Mining Chapter 4 Algorithms: The Basic Methods - . kirk scott. did you have any idea that symbols like these could