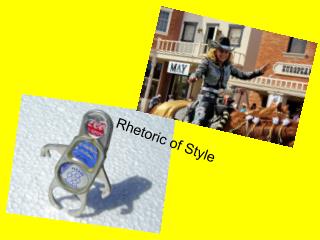 Grammar as Rhetoric and Style - . parallel structures. generally:. sentences or parts of a sentence are parallel when

Rhetorical/Style Analysis - . analysis of syntax. definition and main ideas. syntax is not a “stand-alone” analysis.

Rhetoric - . by alex, camille, esteban &amp; gearard. rhetoric. what does rhetoric mean to you?. rhetoric is the

Grammar as Rhetoric and Style - . modifiers. what are modifiers?. a modifier may be a one-word adverb or adjective; a

Rhetoric - . any communication used to modify the perspectives of others. rhetorical situation. the circumstances in

Grammar as Rhetoric and Style: The Appositive - . mrs. woit. the appositive. an appositive is a noun or noun phrase that

RhETORIC - . “he who does not study rhetoric will be victim of it.” – found on a greek wall from 6 th century b.c.

Rhetoric - . rhetorical triangle, soapstone , and appeals. rhetoric. “the faculty of observing in any given case the

The Rhetoric of Film - . analyzing arguments in documentaries. film as text. both documentaries and written texts are

Lets Get Style- letsgetstyle.com - A wide collection of products with the best discount offers at lets get style. fill