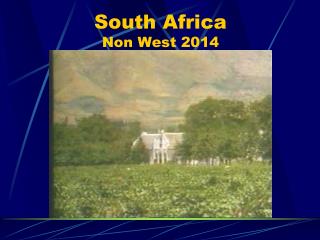 South Africa Non West 2014. The Population of South Africa. The Dutch arrived in the 1600s and were the first Europeans to settle in South Africa. (AKA: Boers/Afrikaners) Over time, German and French Settlers joined them and they began to speak their own language - Afrikaans. Imperialism. – Module 3 – How to identify a species Sahel West Africa - . identifying and counting waterbirds in africa –