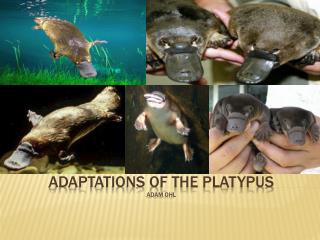 Adaptations of the Platypus adam Ohl Adaptations of the Platypus adam Ohl. What types of adaptations has the platypus evolved what purpose do these adaptations serve? Focus on: Appendages, Venom, and Sensory Adaptations. Question. Lineage. Synapsids- Mammals, and mammal like animals. Monotremes- Egg laying mammals.

Adaptations of the Platypus adam Ohl

Adaptations of Mom the Giraffe - . structural. neck: giraffes use their long necks to reach for leaves high in trees.

Adaptations (2) - . how do plants and animals survive? how do they adapt to survive in their chosen habitats?.

The Platypus Venom - . where does it come from? what is it composed of? what are these effects ?. what is a platypus ?.

Lemur Adaptations - . if frightened they yell shrill sound that makes predators’ ears hurt. give a scent that they are

PLATYPUS - . ashley spence. habitat. the duckbill platypus lives in the deciduous forests of australia. appearance. the

Platypus By: Aubrey Mrs.Kringer - . males. male platypuses are venomous. they have sharp stingers on there heels and

Adaptations - . adaptations. an adaptation is a characteristic that enables an organism to survive in an environment.

Platypus - . jess hillegas. what it looks like. the platypus is a mix of a duck, beaver, and otter . it has a ducks

Adaptations and Biomes - . obj. 3a, 3e, &amp; 3h. adaptations to an environment. every organism has a variety of

Platypus - . floppy, swimming platypus. by: ac . introduction. the scientific name of a platypus is orrithorhynchus

Adaptations (3) - . how do plants and animals survive? how do they adapt to survive in their habitats?. adaptations (3).