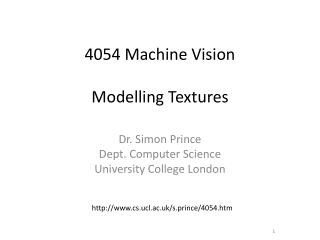 Images, Textures, and Vision - . what are the issues as related to mr/vr?. textures, billboards, sprites image based

Machine Vision - . ent 273. hema c.r. edge detection techniques. lecture 6. what is an edge?. edge is a discontinuity in

Machine Vision - . acquisition of image data, followed by the processing and interpretation of these data by computer for