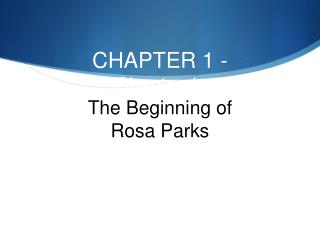 CHAPTER 1 - Chapter 1: The Beginning of Rosa Parks. On February 4, 1913 in Tuskegee, Alabama, James and Leona Edwards McCauley had no idea that their new baby girl, Rosa Louise McCauley would one day change the world.

Chapter 2: In the Beginning - . understanding the scriptures. 1. in the beginning (pp. 40–43). anticipatory set discuss